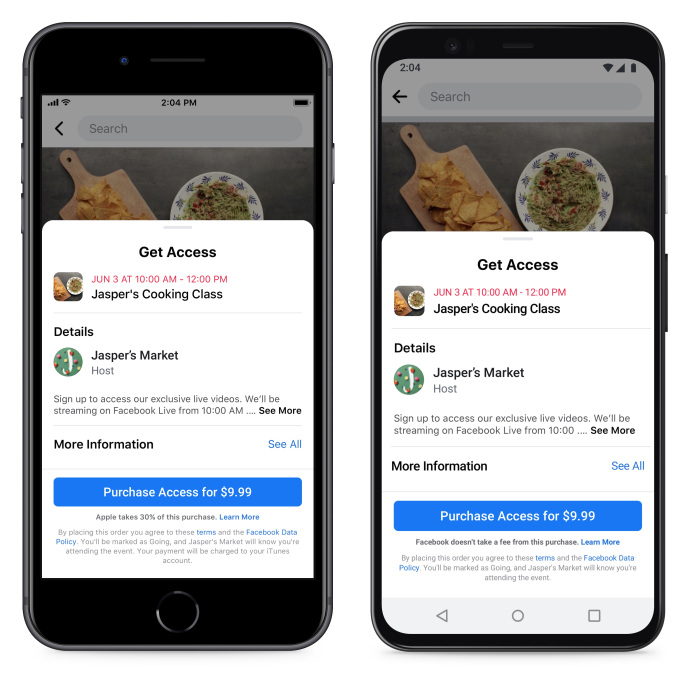 Facebook joined the growing ranks of companies publicly complaining about the 30% fee that Apple collects on payments made through its App Store.

Those complaints came midway through a blog post about the social network’s new feature supporting paid online events. Facebook said that to support struggling businesses, it won’t be collecting any fees on those events, at least for the next year, which means that those businesses keep 100% of payments on the web and on Android.

But Facebook said that won’t be the case on iOS, due to App Store fees, and it took aim at Apple with surprisingly direct language (at least, direct for a corporate blog post):

We asked Apple to reduce its 30% App Store tax or allow us to offer Facebook Pay so we could absorb all costs for businesses struggling during COVID-19. Unfortunately, they dismissed both our requests and SMBs will only be paid 70% of their hard-earned revenue. Because this is complicated, as long as Facebook is waiving its fees, we will make all fees clear in our products.

To that end, the post includes screenshots of how the events payment flow will look on iOS and Android . On Android, it says, “Facebook doesn’t take a fee from this purchase,” while on iOS, it says, “Apple takes 30% of this purchase.”

Facebook said this language is included in the app update “which we submitted to Apple today for approval” — suggesting that there’s a possibility that the update won’t be approved.

This comes just about 24 hours after Fortnite was removed from the App Store, after Epic Games introduced direct payments into its hit title. It seemed like Epic was intentionally trying to provoke a fight, with the company quickly announcing a lawsuit against Apple and releasing a short in-game video parodying Apple’s famous 1984 commercial, with Apple cast as the villain. (The game publisher is in a similar battle with Google and Android.)

While Apple’s 30% fee has been around for as long as the App Store itself, the issue came to the forefront earlier this summer after Basecamp got into a public feud with the company over its subscription email app Hey, for which the developer tried to circumvent App Store fees by only accepting subscription payments on its website.

Apple’s Phil Schiller told us at the time that the controversy was not prompting the company to reconsider any of its rules, which he said were designed for a better app experience — to avoid situations where “you download the app and it doesn’t work.”

Epic Games launches a campaign (and lawsuit) against Apple